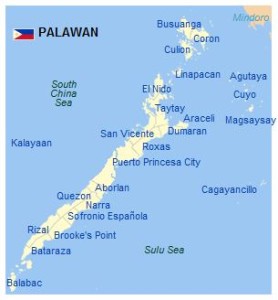 Palawan is an island province of the Philippines. The province is named after its largest island, Palawan Island. The island is 450 kilometers long, and 50 kilometers wide. Its capital is Puerto Princesa City. Palawan’s almost 2,000 kilometers of irregular coastline are dotted with roughly 1,780 islands and islets. Has rocky coves and sugar-white sandy beaches.

It also harbors a vast stretch of virgin forests that carpet its chain of mountain ranges. The highest peak rising to 2,086 meter is Mount Mantalingahan. 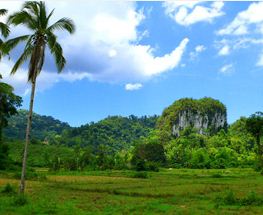 Unesco declared the entire Province of Palawan a Man and Biosphere Reserve in 1990. A diverse natural landscape with tropical rainforests, montane forests, mangroves and coral reefs.

Total forest cover is about 56 percent of the total land area of the province. Beneath the seas are nearly 11,000 km2 of coral reefs, representing more than 35% of the country’s coral reefs.

Besides of course the famous Bacuit Bay of El Nido in the north of the Island, Palawan has also two World Heritage Sites designated by Unesco. The spectacular Tubbataha Reef Marine Park and the Puerto-Princesa Subterranean River National Park.

The park features a large limestone karst landscape with an underground river. The river emerges directly into the sea, and its lower portion is subject to tidal influences. The area also represents a habitat for biodiversity conservation. The site contains a full ‘mountain-to-sea’ ecosystem and has some of the most important forests in Asia.

Puerto Princesa Underground River is since 2012 officially confirmed as one of the New7Wonders of Nature. 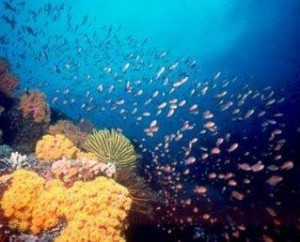 The park covers 332 km², including the North and South Reefs. It is a unique example of an atoll reef with a very high density of marine species. The North Islet serving also as a nesting site for birds and marine turtles. The site is an excellent example of a pristine coral reef. It has a spectacular 100 m vertical wall, extensive lagoons and two coral islands.